Skip to content Skip to main menu
Home › A 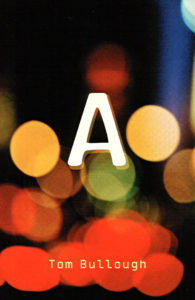 Before Konstantin and The Claude Glass, there was A, which was published in 2002. As the jacket has it:

In an attic in Southwest London, an acid factory has just been dismantled. Six students, among them the luminously sexy Belle, are speeding in a decommissioned ambulance towards a tiny cottage in the Welsh borders. Two homicidal drug dealers and one middle-aged police inspector are giving chase.

Meanwhile, Belle’s jilted lover Angus stares out of his cottage window at shadows sliding across the grassy hillside, listens to squirrels fidgeting in the eaves and turns his thoughts to a squadron of young Japanese pilots, setting out from a Kyushu airstrip in 1945 intent on restarting the Second World War.

And that’s just the beginning…

The book emerged out of a particularly low point at university when I was living in a sort of exo-depression of a house, in Staines, where moulds boiled from the tea cups and those few residents who had yet to be institutionalised lay stunned among a good foot of refuse. In this damp, freezing hole, there was one particularly bad week in which – of the original seven residents – one had to leave with ME, another turned out to be in prison in France and, one morning, a third materialised in handcuffs on the doorstep accompanied by a pair of policemen, having been apprehended in West London with a pocketful of pills. There were two of us in the house at the time, and I was obliged to accompany one of the officers as he conducted his search of the premises. My own room (as Nick’s) is described closely in the book, and its condition was so horrendous that the officer simply refused to enter it. Instead, he asked me directly whether it contained an LSD factory, since, apparently, there was one somewhere in the Spelthorne district.

Among the various stories I fiddled with over the succeeding weeks, one involved a bunch of people not unlike ourselves who actually possessed an LSD factory, and that, essentially, is the kernel of the novel.

Both in fiction and reality, A brought me out of the city back into my native hills, which is where writing really started to happen for me. In March 1999, I moved from London to a three-room, road-less, water-less cottage near Hay-on-Wye. At the time, I had been writing for several years. I had already written and abandoned two manuscripts of 90,000 and 70,000 words – the latter the first draft of A – but up at Ty Allt something altogether different happened. There is an analogy here with sexuality. As a twelve or thirteen-year-old, you know that something’s going on. You’re drawn by rumour and instinct towards girls or boys or masturbation or whatever, and then one day you have an orgasm. There is probably a language in which this sentence would be constructed “one day an orgasm has you”, and this would be the better language here. As I weighed into a second draft, I followed my gang of students once more out of London, but this time I had them wake one morning in Llanthony, in the Black Mountains, and suddenly I found the writing effortlessly clear, perfectly weighted, the slopes of Capel-y-Ffin and the Gospel Pass alight in the autumn sunshine. Wild with excitement, I stayed awake for three days straight.

In 2003, I did an interview with Phil Rickman on BBC Radio Wales, who suggested that A was a rejection of gritty urban books in favour of a fresh, romantic ruralism. To be honest, I know no more now about gritty urban books than I did at the time. I had no particular ambitions of that kind, and the discovery that I could write so passionately about nature and the rural landscape came as quite a surprise. But then, I was just beginning work on The Claude Glass, researching the connections between Radnorshire and the Wordsworth family. In some respects, he was absolutely right.

It was in A that the preoccupations of both The Claude Glass and Konstantin first revealed themselves.

And its chapters are titled A to Z.

“Energy, humour and a roller-coaster plot are more than some debut novelists manage but 26-year-old Tom Bullough hits all three bull’s-eyes with A.”
Financial Times

“A thoroughly good debut novel … the plot is strong and gripping, and the characters are so meticulously developed that, in the end, even bit-part characters will stay in your mind.”
The Courier

“He’s hip, he’s funny and, most unusual of all, Tom Bullough isn’t afraid to get tender with his characters. He writes about intimacy with as much assurance and honesty as he does about acid. Enjoy the ride. But there’s a risk…”
Francine Stock